PROCEEDS OF NEW THE WHEEL OF TIME® CHALLENGE COIN, ALL ‘MAT CAUTHON’ SHIRTS TO BENEFIT WOUNDED WARRIORS IN HONOR OF MEMORIAL DAY

Along with several other new products, Ta’veren Tees has released the first ever The Wheel of Time® Challenge Coin. The bronze plated coin, measuring 2” in diameter, features the iconic snake and wheel symbol on one side and the ancient symbol of the Aes Sedai on the other. Each is packaged individually and sold for $12.00 at www.TaverenTees.com/wotcoin. 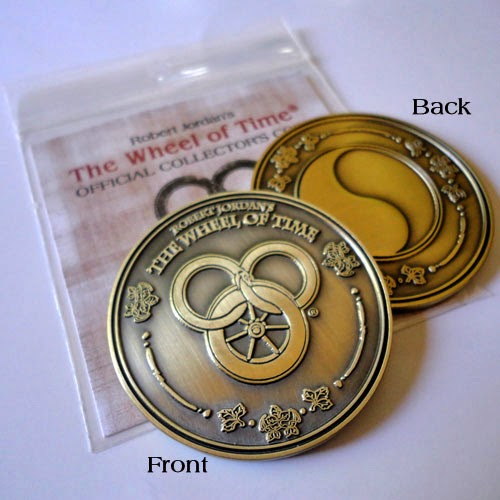 In honor of Robert Jordan’s military service in Vietnam, Ta’veren Tees will donate 10% of proceeds from coin sales to the Wounded Warrior Project. A portion of the proceeds from all Mat Cauthon related shirts will also be donated, as he is, after all, the Son of Battles. Those include the ladies’ and men’s styles of the “Toss the Dice” and “Ravens” tees, as well as the “Mat Cauthon by Seamas” tee available at www.TaverenTees.com.

Challenge coins in general have a militaristic background. Among soldiers, a challenger would ask a fellow to see the medallion. If the challenged could not show his, he had to buy a drink for the one who challenged him. For Memorial Day, Ta’veren Tees would like to honor Jim Rigney and the countless others willing to serve, and would like to thank customers in advance for being a part of the donation when they purchase these items.

In addition to the coin, new items also include six vinyl stickers, bookmarks, and five character posters by Ariel Burgess. To see these products visit www.TaverenTees.com/novelties.

Robert Jordan’s Military Background
Many WoT fans might not realize that before Jim Rigney was a writer, he was a soldier in the U.S. Army and fought in Vietnam – an experience that affected his life, and eventually the story he would tell.

Rigney grew up wanting to attend West Point, but at sixteen learned his eyes were too bad for admission. He instead went to Clemson University, but ran into trouble because he was on a football scholarship, had chosen a major in electrical engineering, and was discovering girls and beer.  He then joined the army “because that is what men do in my family. That is simply the way it has always been done . . . the Rigneys have joined the U.S. Army to go where the shooting takes place.” He went on to complete two tours in Vietnam, serving as a helicopter door gunner. It affected him profoundly. In his blog, he wrote:

“I have, or used to have, a photo of a young man sitting on a log eating C-rations with a pair of chopsticks. There are three dead NVA laid out in a line just beside him. He didn't kill them. He didn't choose to sit there because of the bodies. It was just the most convenient place to sit. The bodies don't bother him. He doesn't care. They're just part of the landscape. The young man is glancing at the camera, and you know in one look that you aren't going to take this guy home to meet your parents. Back in the world, you wouldn't want him in your neighborhood, because he is cold, cold, cold. I strangled that SOB, drove a stake through his heart, and buried him face down under a crossroad outside Saigon before coming home, because I knew that guy wasn't made to survive in a civilian environment. I think he's gone. All of him. I hope so.”